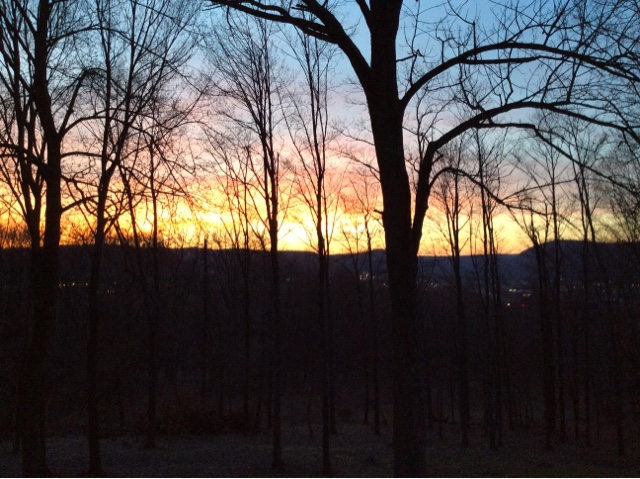 My friend from high school died a couple of days ago. This is the view we shared of our hometown.

My friend was 42. He was married with 3 school-age children.

Since we graduated from high school and all went our separate ways, he was someone I might run into at the supermarket when I went home for a visit. He was a guy that I exchanged pleasantries with on Facebook. Congratulations on new jobs, new babies, new cars – that’s it for 20 years. Then he got sick. He announced his illness on Facebook, February 2015. It was an aggressive form of cancer, but he was ready to fight. He was one of the fittest, clean eating, clean living people I knew. He looked the picture of health. Actually, he looked better than healthy. He looked like he could kick somebody’s ass, so kicking cancer seemed like it would be no problem.

He publicly announced his illness and his plan to fight and was answered with silence. I knew it wasn’t because no one had seen his post or that no one cared. It was just a lack of words. I mean what is the proper sentiment to offer when someone who has so much before them declares, hey guys, this just might be where the road ends for me.

I was sick once. I was able to hide it from most of my friends and family in the US. No need to worry them till it was actually time to worry. I couldn’t really hide it from friends and family here in Poland; however, the response I got from the people who knew and the people who didn’t know was pretty much the same. Kind of like how your chance of winning the lottery doesn’t change a whole lot when you’ve bought a ticket and when you haven’t bought a ticket.

I resented that fact for a good long time after I got better. Not when I was sick though. I was grateful for the silence back then. I was grateful that some people treated me like I was already gone. I didn’t have the energy to spare worrying about them.

But I could see from post to post that the lack of response bothered this friend. I had to reach out to him. I told him how my story played out. How resentful I felt. How much I didn’t care about it now. How much more sympathy and empathy I had for people now. He said he really appreciated the fact that I had reached out. I wished him all the strength he would need.

For about the next year, it seemed he was winning the fight. He looked great. He said he felt great. He spent a lot of time on social media promoting his sports regimen, fighting against transgender bathroom access, supporting Donald Trump, and telling me to repent for my sins and return to God’s path before it was too late. That’s not how I would choose to spend my time, sick or not sick, but to each his own.

He often wondered if this was his last birthday, his last Christmas, his last trip to the beach. He expressed his disbelief of the fact that he wouldn’t see his children graduate from school or get married. I too have those thoughts occasionally, but in a “knock-on-wood” way. Not in a “this-is-my-reality” way.

The support finally did roll in. It took some time for people to break the ice, the ice of sorrow and the ice of encouragement. Now that he’s gone, the support for his family continues to roll in.

I did my best. At the beginning of his fight, he had asked me to pray for him. It wasn’t a flippant request. He was a deep believer and a very public worshipper. I told him that I would keep him in my thoughts, but that I wouldn’t pray for him as I am an atheist. Unfortunately, he couldn’t understand how I found meaning or purpose in life without the promise of an afterlife. I couldn’t understand how while facing death, he couldn’t see that his family, his friends, and his relationships were his purpose in life.

Or maybe he did. Closer to the end, he wrote to me and confided that his faith in an afterlife was growing weaker by the day, and it worried him so. I told him it didn’t really matter, did it? Something will happen after we die. We might go to another place or maybe our consciousness will come to an end. What will happen, will happen regardless of the amount of faith we put into one scenario or the other because we have no way of knowing. His last comment to me…”Hahaha, I knew the atheist would be the one to put me back on track.” I hope I did.

Mike, it was a pleasure to have known you.