THE ORIGIN STORY, PART ONE 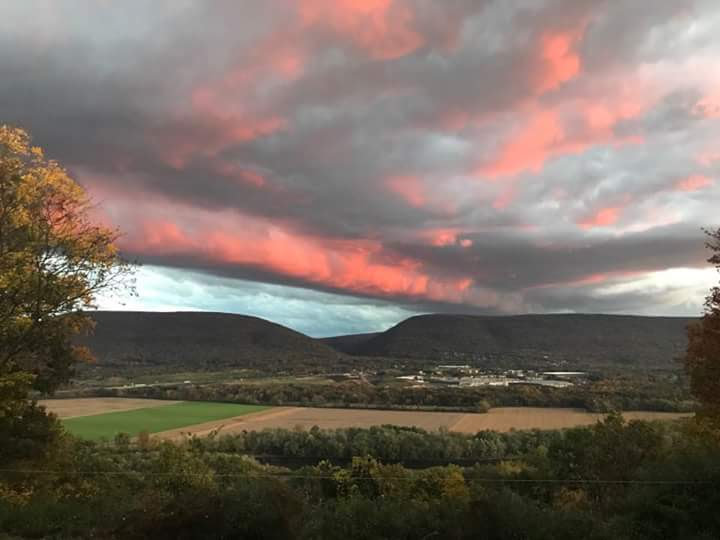 Here’s an excerpt from an interview I did some time ago that never in fact appeared anywhere. Scroll through to check out my answers.

I come from a completely ordinary small town in Pennsylvania in the northeast of the US. It’s really a lovely place, surrounded by rivers, lakes, and mountains. My hometown is what people think of when they think “America”. I always felt that my hometown was bigger than it actually was because we had a university. My hometown doubles in size when students come back for the semester. It always made me feel worldly as a kid.

Where I come from was an easy question to answer – far easier than how I ended up in Poland. I ask myself that question on a regular basis. I really do. For example, sitting in my old German house in the deep Polish village, and I hear my neighbor shout from her front porch, “Lucy! I know you’re up. Hurry up! I put the coffee on.”  Yep, I’m Lucy here in the village. For the longest time, I didn’t even know why. I thought that someone had misunderstood my name or something although you’d have to misunderstand pretty bad to mix up Chris and Lucy. I had never heard of the famous Lucy from the TV show Ranczo. I still have never watched it. Is it any good?

It is very cliché I know, but I came to Poland originally with a program that arranges for Americans to teach English in rural areas. It was the late ‘90s, and frankly I wasn’t particularly interested in Poland per se. I was much more interested in getting out of my parents’ house and getting something good down on my CV. It wasn’t much of an offer, this program. I mean the program told me where to go and that’s it. I had to pay for everything, and I didn’t even earn my plane ticket in the entire year I worked, 13th salary and all. But I did bring back a very interesting souvenir, my future husband.

I must admit I wasn’t crazy about Poland then. I enjoyed my year well enough, but I couldn’t function in the language. I was technologically isolated as much as I was physically isolated. I lived in archiwum. I was ready to go home. And go home I did with my souvenir from Poland. I got a teaching job, and we started our American life. Little did I know that we would return to Poland some day and for good.

Back then when I first moved to Poland, one of my biggest difficulties besides the language barrier was the almost complete lack of contact with my family and friends in the US. It’s a different world now with Facebook, FaceTime, Skype and all that.

Next was the continuous stream of people telling me what I could and couldn’t do. I was not accustomed to that. I had a neighbor inform me that I kept too late hours for a young lady. I had a co-worker at school inform me that my nail polish was inappropriate, metallic royal blue. I could go on and on with how other adults felt they had the right, if not duty, to sort me out. I reminded each and every one of them that I was an adult just as they were and that I already had a mother, thank you very much.

Just some information here, after living in the States together, Misiu and I decided to get married. It appeared that the red tape was easier to get through in Poland so we came here to seal the deal. In the meantime, I got a job in Poland in an American company. Another difficulty I had was with the atmosphere at my office. However, I think it had more to do with my bosses than with Poland. (Like total disgusting jokes about our sexy secretary itp.)

What did I know about Poland? Not a lot, but I was so American, I thought, so what? I can do it. I could find Poland on the map which is half the battle, isn’t it really? First I asked the gentleman who organized the program for information. I could see that he considered himself an expert. After he told me that I should pack a year’s supply of toilet paper and soap, I decided he wasn’t quite the expert he imagined himself to be.

After that I called a former classmate who had come to Poland on a university exchange. She gave me some practical advice. If somebody offers you flaki, don’t eat it. Keep 50 złoty in your pocket in case some people with gold teeth mug you. Budapest, yes. Bucharest, no. And last but not least, she passed me the information that Polish men generally are not circumcised and that in an intimate situation I should be cool. Good to know, right?

I knew a lot about Poland from the history books, but that knowledge didn’t explain everyday life in present day Poland. Knowing about shortages during PRL doesn’t translate into an immediate understanding of why Babcia is standing so close to you at the post office. You know what I mean? My knowledge helped, but it didn’t.

I wanted to learn more prior to coming here, but I was restricted to what I could find in the bookshops, and it was early days for finding reliable information on the internet. That left me with a guidebook warning of cinkciarz and a Berlitz phrasebook complete with pickup lines in Polish. A funny thing did happen though. I had just bought a Polish guidebook and was standing in line in another store waiting to buy pajamas of all things. The sales associate asked timidly, “Are you going to Poland?” I mumbled that I was in fact heading off to Poland, to Wroclaw. She clapped her hands together and exclaimed that she was from Wroclaw. I later visited her family here. Isn’t that just the oddest thing?

After 5 years in Poland, I understood (started to understand) what the history of Poland means to Polish people. I returned to that history in its context. I took all the verbal beatings dished out by Polish people when I muttered, “Oh, I thought Copernicus was Italian.” And I stood by to give a verbal beating to every last person I heard say “Polish death camp in Auschwitz”.

At the 5 year point, I had learned enough Polish to perform basic transactions on my own. I could drive, go to the mechanic, doctor, dentist, all that basic stuff. I knew my city well. I started to fill in my cultural holes and started to read some Polish literature. I started to learn about current politics. I started on Polish cinema. That was at 5 years.