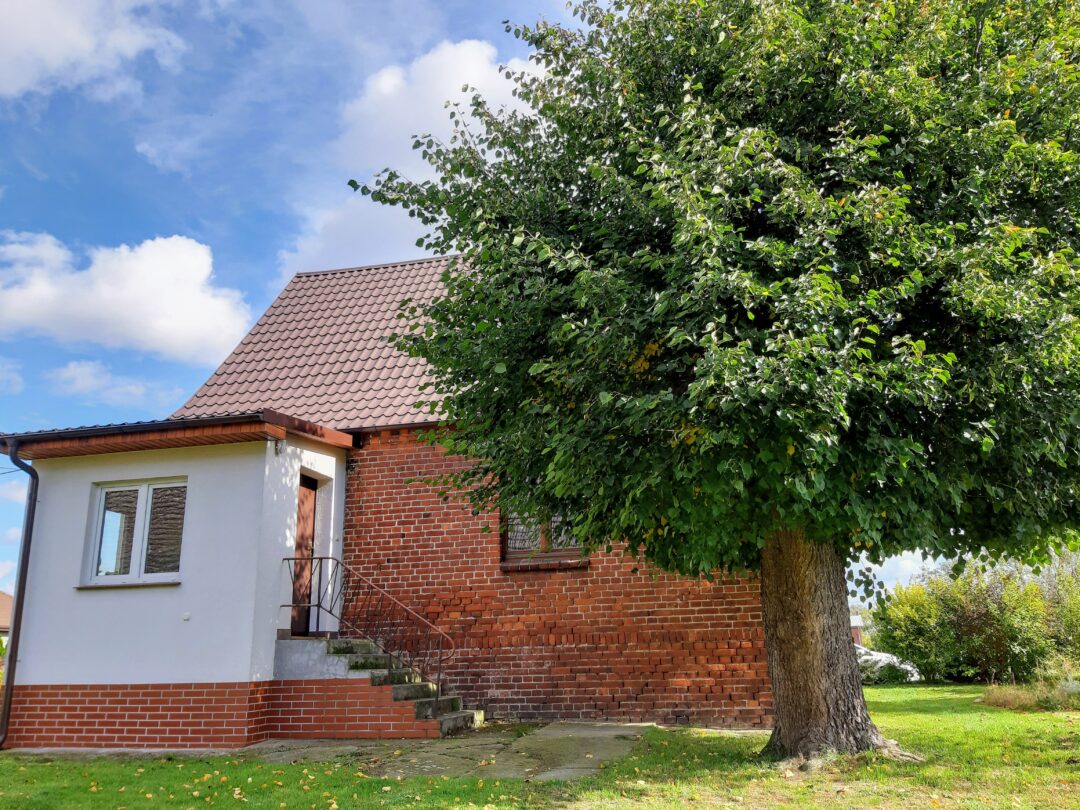 My next door neighbor and I have a friendship. It would seem an unusual friendship. I am American, married with 2 kids, and owner of a ruin of a house in a village in Poland. My neighbor is Polish, in his late 80s, widowed, and living in the same house next to mine since his childhood. His family was moved here, from pre-war Poland to the west after WWII. He wears double hearing aids and my Polish is what it is, but we have the best conversations.

A prelude to a friendship

We first met our neighbor and his Mrs. when we came to look at the house. They held the key. It was he who declared that the previous occupant had died right THERE as he dramatically pointed to the spot where I was standing. And that’s the reason I never go to the basement.

He and his wife welcomed us warmly. They said they were happy to get some young people in the house. Because back then, we were considered young people. The neighbor kept a sharp eye on the crew as they worked on our house. Sometimes too sharp, as the workers complained that it was hard to work with someone watching their hands all the time. Our neighbor also got back several items of his, lost years before, that were somehow mysteriously lodged deep inside our chimney.

I brought my father-in-law to give me some help and advice about the garden – garden and house both abandoned for years with only the neighbors’ chickens scratching around. My introverted and quiet father-in-law struck up a conversation with the neighbor. It turned out that 30 years back, they had worked together – in the city. When the neighbor asked what it was like to live in the city, I started to formulate my answer in Polish, only to realize he was asking my father-in-law who lived in the small town 7 km away.

Nipped in the bud

His wife was known to spend time in our garden when we were not home. The Mrs., while previously being a delight, once said something awful to me, cooling our relations for years. I was just a bystander in an argument between her and the neighbor across the street. When it came down to it, the police were called. The police officers asked us for our opinion of the dispute. I only said that for whatever reason the neighbors just didn’t communicate things to each other. It would have been enough for the neighbors across the street to communicate that they were expecting a delivery, and the road was going to be blocked for some time. I mean we had been informed, so we didn’t understand why the other neighbors on our street had not been informed.

Then the Mrs. next door shouted that my opinion didn’t count because I was new (10 year ownership at the time) and that I should just go back where I came from. I burst into tears. I don’t know why. I’m not such an emotional person and certainly not in public. It was just so unexpected and so mean. I could see on her face that when she saw my reaction, she regretted her words, but she never apologized. And thus began years-long silence. I mean I said dzień dobry, and she said nothing. Then the time came when she started bringing me fruit and nuts “for the children” and wanted to talk to me. The other neighbor said that when people try to make up like that, that they are a-fixin’ to die. And it was true.

It took me almost 9 months to give my neighbor condolences after his wife’s death. I mean it is hard to catch him even now, but then he just stopped going out. Another neighbor lady was tasked with checking on him and cooking some meals for him. I mean his family paid her, not that she was looking to replace his wife. I finally caught him out in the garden…well, actually, he caught me. I don’t have hearing aids, but maybe I should have. My hearing is not the best. As I was digging near the fence, he snuck up (I mean he didn’t. I just didn’t hear him.) and asked me what I was digging. I replied that I was digging the Golden Train to which he laughed a hearty laugh.

I decided it was now or never and gave my condolences. He took off his hat, wiped his head with his handkerchief, and then wiped his eyes and thanked me. After that he described that day, how they found her, how he felt, and what it was like to live now without her. He also told me that he didn’t believe in God and never did, that he feels like we are here one moment and the next moment we are not, and that is it. My husband said I am a conversational wizard.

After that, we had a renaissance of our friendship which exists 100% over the fence. We share gardening tips, and when I say share I mean he tells me things because I don’t know anything about gardening. He said he doesn’t even really like gardening, but he doesn’t have anything to do all day. Sometimes he waves as he goes out on his bike or for a stroll. And he rides no matter the weather. Like on a day when it hit nearly 30 degrees Celsius (that’s hot), and I was sitting in the garden sweating like a stuck pig, there he was out for a ride wearing slacks, a dress shirt, and a formal hat. To jest zdrowie!

Then the pandemic hit, and we began to spend much more time at our house; we split our time between the city and the village. I had more opportunities to work in the yard and run into my neighbor. He asked me all about the pandemic, and I asked him if it was true that “Crazy Bolek” had murdered two people, not realizing that not only did the neighbor know Crazy Bolek, but he had also known his victims. He confirmed all the gory details of the story and added a few of his own. I learned a bit about our house which is a carbon copy of his own. He remembered how we had bought the house and how one of the previous owners had broken in after the sale, giving us a ładne powitanie (a nice welcome) to our village.

So much to talk about

We gossiped about his next door neighbor from the other side who had sold their house, the same style as our own, four in all built in a row on our street in 1935. The son of that neighbor had gone to prison for attempted murder of his mother and then returned home after finishing his sentence. In additional village gossip, I offered no insight as to why the neighbors across the street had got divorced. I guess I didn’t hold up my end of the storytelling bargain.

If my neighbor doesn’t understand what I am trying to say in Polish, he doesn’t let on. My neighbor uses old forms, which is fascinating to listen to in Polish. Now that I know Polish a little better, I listen for them. People just don’t talk like that anymore.

Last summer, the lady who was taking care of him (20 years his junior) fell ill. He was heartbroken that he couldn’t say goodbye to her. She was a tiny little thing on a good day, and struck by illness, she just couldn’t fight it. We don’t know if it was her decision or the decision of her family, but nobody was allowed to visit her. As I taught my lessons online, I could see out the window over the top of my computer screen as the ambulance came multiple times over the next several months until she finally succumbed to cancer. It broke my heart to hear my neighbor in the days before she passed. “She’s my friend,” he implored, “my closest friend and they won’t let me say goodbye.”

I haven’t seen much of my neighbor over the last several months. I did see him out on his walk at Easter, but he didn’t respond to my dzień dobry, no hearing aids that day. He does have family, a daughter and sons which he still refers to as ‘the boys”. I assume he has grandchildren, but I have never seen them. I mostly see his daughter who comes frequently and can be seen cleaning the windows, hanging fresh curtains, digging in the garden, and shaking pears from the tree. She also talks to me over the fence a bit, but not like her father.

It’s not hard to strike up a conversation with an elder over the fence. You start with dzień dobry and then move closer to the fence. Your conversation partner will move closer to the fence and remark on the the weather. You too will comment on how dry it has been, so dry that even your koperek (dill) won’t grow. You will find out that it hasn’t been this dry since right after the war 😉 Then there’ll be a family review. Hopefully, you’ll find out that everybody is well, that nobody has had Covid yet, knock on wood.

After that, you are free to delve into more serious topics, to get to the nitty gritty. At this point, Chris’s interrogation begins. I’ve asked my neighbor about where he lived in the east, his first memory in his life, and what it was like arriving to our village as a child. (He claims the German inhabitants were still there, and they had to share for a week or two). I often ask him – Is it true that….? And that usually gets the conversation flowing. It’s not all one sided; he also asks me about my life in America and my life in the city. He said that no one had ever asked him anything about his life. Something from his vegetable garden is almost always passed over the fence, and if I don’t take it, it appears magically on my doorstep without even a knock on the door.

Once he asked me if I would remember him after he passes. “Of course I will,” I responded.

All my Ex’s Live in Texas