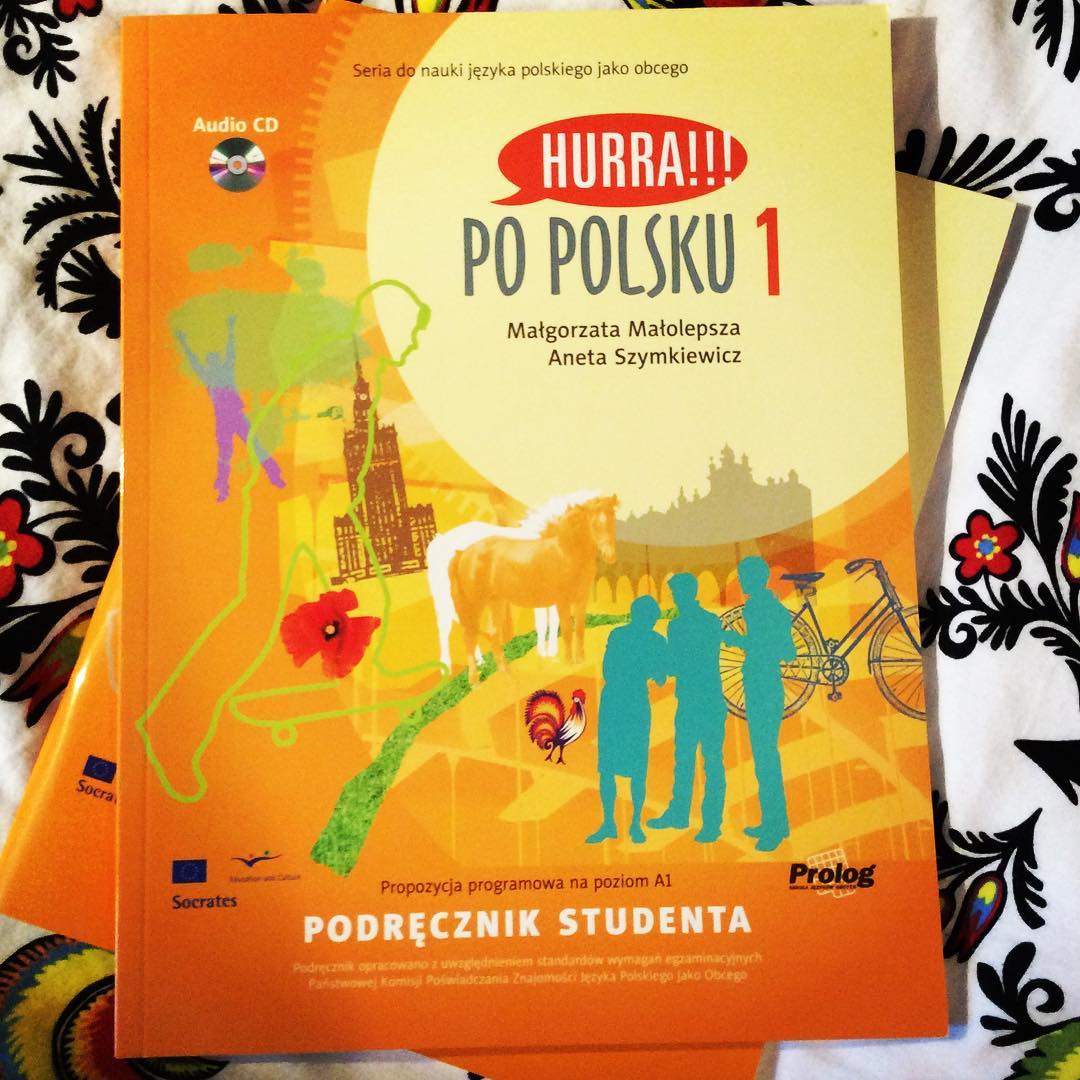 I wanted to put a cute saying here about the power of repetition in learning, but the first quotes I could find were either about repeated lies becoming truth or things sourced to Hilter, so we move on.

I know it is oft-repeated, but in language learning, repetition really is key. Except for me and Duolingo, the repetitive language learning app I used to learn the Polish language. I have correctly expressed that the boy is eating an apple in Polish about a thousand times, and Duolingo still keeps asking me about this boy and his apparently never-ending apple. Meanwhile, my husband has completed the entirety of Duolingo Ukrainian. Хороша робота!

To be fair before I start on the Polish people I must confess, I overuse words in English. The number one word I overuse in English is so. It’s so versatile and helps keep things moving along in writing or conversation so well. I also overuse really, more often as an interjection, but just like so, really is really versatile. Weird is another one I use a lot. Maybe I’m just weird or my life is weird – I don’t know. My students usually start out their lessons choosing strange as their go-to word, but somehow weirdly end up with weird in their arsenal. Also in their arsenal is a choice swear word or two which in my defense the proper use of is a vital part of learning a foreign language (is what I tell people).

My English as a second language teaching in Poland began at the high school level in a small town. It was somewhat of a novelty back then to have lessons with a native speaker, thus (but I wanted to write so) the school set up the schedule so that I had each English group once a week. That means for each grade level, I repeated the same lesson six or seven times per week. A lot of repetition for me, not so much for them. It was like my own personal cram session to learn the Polish language especially the useful words. That’s how I came to acquire my first sets of words in Polish – as a byproduct or side effect of teaching my students.

Those words I learn in Polish back then were really just the basics, nothing special, but vital to my survival in Poland alone. Even though I learned those words out of sheer repetition, you wouldn’t say that marchewka (carrot) or która godzina (what’s the time) classify as overused words. There are some words in Polish that I do think are overused though. Some of them annoy me, but all in all, overusing is great for me. That’s how I learned those words in the first place.

Even though I appreciate every word I have learned, some of them come back to me over and over. Let’s take a look at some of the most overused Polish words in my totally non-objective analysis.

My favorite overused word in Polish is specyficzny, probably for it’s specific use in Polish. It’s easy to figure out what it means. It’s specific. It basically means the same as in English, however in Polish it is often used to describe a person. A specyficzna osoba is considered different or peculiar and in most cases not in an exactly good way. Students use it to describe their teachers, employees their bosses, spouses their in-laws. There is also a suggestion that this person is hard to get along with. I suppose it is used so much because sometimes people are peculiar in such a way you just cannot put your finger on what exactly it is about them that makes them so specyficzny.

Masakra translates to massacre, quite literally, but colloquially is used to describe something bad that has happened. In my unscientific research, it seems to be more popular with the teens and can be often (over)heard on the bus.

Did you hear what Maria did? She cut her own bangs. I know it’s lockdown and all but jeez. Słyszałaś, co zrobiła Maria? Sama obcięła grzywkę. Wiem, że to lockdown i wszystko ale rany boskie.

How did her bangs turn out? Jak wyszła jej grzywka?

Honorable mention in this category goes to katastrofa and also Sajgon, both used to describe disastrous situations.

Ogarniać (or oganiać się) is quite useful indeed, thus justifying its overuse. I use it myself, but if I could I would ban it in my home because my kids mega, super, totally overuse it. Without the się it means to get something together or organized, like to get your house together before a party. Muszę ogarniać dom. With the się it means to get a grip, to get yourself together which my kids scream at each other on a daily basis with an added debilu on the end. Ogarnij się, debilu. Get a grip, you idiot. They love each other. I think.

Luksusowy (luxury/luxurious) along with prestiżowy (prestigious), ekskluzywny (exclusive) and even wyjątkowy (exceptional) are overused in the marketing world, especially in real estate marketing. Ekskluzywny i luksusowy apartament w centrum Wrocławia z wykończeniem premium pod klucz which usually means a regular old apartment in a block of flats in an almost suburban area, no offense to blocks of flat or city outskirts, I live in them both, but luxury apartments they are not.

My most memorable (mis)use of luksusowy was my OB/GYN who wanted to put my mind at ease about the birth process and the whole staying in a Polish hospital thing. When he boasted of the wonderful luxurious conditions his birthing unit had to offer, he must have forgotten that I had in fact been in the hospital in Poland several times (medical history) and once under his care (umm, his recent memory). We have a totally different concept of luksusowy. The birthing units were at most decent, and I am being generous. You don’t want to know more.

The Best of The Best

In this category, we find words such super, mega, ekstra, even fajny which are used quite often and all basically mean good, great, cool, and nice. I would liken them to the use of like and literally (not literally) in English. I know super and mega are English words too. Mega in Polish can also function as a stand-alone. Something like wow. Super is used the same as in English just pronounced as a Polish word, like soup-air. The least offensive is probably fajny because fajny is well fajny. These words are so useful that I am guilty. I overuse them too.

If you want to jazz up your fajny, you can say zajefajny which adds a prefix from a slightly vulgar zajebiste with the innocuous fajny to achieve something like freaking awesome, but with a naughty twist.

Fakt faktem is used to emphasize the fact that the fact you are speaking about is true or factual. In today’s post-truth world of “fake news” and people expressing their feelings as facts, my ears perk up when I hear this one to make a mental note to check if the fact is in fact a fact.

If you are in any buy and sell groups online, you know that people can just be the worst. Sometimes I feel like they want me to pay them to take my stuff. And believe me, when I try to sell something that I don’t use or need anymore, I always sell it cheap. I’m not going to make a fortune off my kid’s old snowsuit.

These groups aren’t just for unloading your stuff, you can post that you are looking for something in particular whether it be a product or a service. I am looking for a plumber. Nie za milion monet. (Not for a million coins) Oh really? Because I was going to recommend the most expensive plumber I know.

Honorable mention in this category goes to cena na priv which means the seller doesn’t list the price, you can find out only in a direct message which annoys me.

Speaking of plumbers, hiring tradesmen can be tricky, made even trickier than it is to learn the Polish language. I like to have everything upfront – the tasks, the materials, the price estimate, etc. before I decide to start a project and choose a person to do it. Figuring that stuff out later not only causes me stress, it also leads to misunderstandings, sometimes costly misunderstandings. So when I hear dogadamy się później (we will figure it out, settle the terms later) my wallet starts to itch.

Usually fast on the heels of dogadamy się później comes Pani będzie zadowolona (you will be happy). In the history of happiness, I have achieved very little of all the happiness I have been promised. From uninstalled ventilation shafts to hot water being hooked up to the toilet, unhappiness with my projects is my default setting.

I am guilty of overusing the following words in Polish: właśnie (exactly), prawda (truth, but like right in my use), dokładnie (precisely), no wiesz co (you know what), coś ty (come on, really), po prostu (simply), raczej tak (I think so, I guess), generalnie (generally), ogólnie (basically).

As you can see, they are all very useful when you want to limit how much you have to say. Add a few swear words in there, and I can have a whole conversation.

Trust me, I’m an English teacher