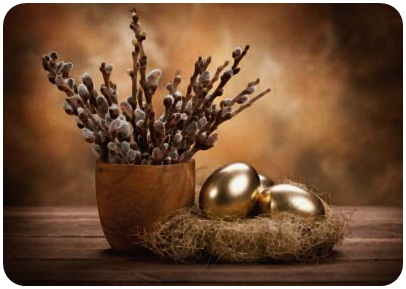 In our family, Good Friday is a day of reflection for many reasons. Now I take a moment to reflect on my father-in-law this Good Friday.

My father-in-law was a quiet man. He was a handsome man as well. I can completely understand why my 15-year-old mother-in-law fell head-over-heels in love with him. So in love that at 16 she gave birth to their first child. Later that year, they married. They went on to have two more children, 5 grandchildren, and 4 great grandchildren over their 54 years of marriage.

I learned who Violetta Villas was from my father-in-law. We were looking through an old photo album where we found a post card with a picture of Violetta Villas posing in a leopard-print bikini, of course with her trademark long, blonde locks of hair. My quiet and introspective father-in-law remarked that when he was younger he thought she was just about the sexiest thing going. I also learned that my father-in-law had a peculiar taste in women.

I called him Ojciec although I’m not a fan of calling in-laws mother and father. Everybody called him Ojciec. Once when I was taking a nap on the couch, the mailman came in (!) and asked where Ojciec was. It was like his name.

You think your journey was bad po polsku

When your child starts school…