Last night I spent my evening blowing my nose like crazy and coughing enough to hack up a lung – pre-school virus. I hope you all spent your Saturday night in a much more entertaining way.

I also had a run through all the channels to check what was on and settled in on MTV’s One Hit Wonders from the ’80’s. As I remember the ’80’s from the first time around, a lot of memories of childhood came flooding back as I listened to those old hits. I also like to watch those kinds of programs with Misiu and hear his memories of the 80’s. We have a lot of similar memories and excluding one crucial potassium iodide incident, you’d hardly suppose we’d been brought up on different continents. Oh, the uniting influence of pop music.

My favorite video from last night’s line-up was Kajagoogoo’s hit “Too Shy”. Who could forget that song? (Who could figure out what they were actually singing?) And who could forget Limahl’s hair?

Misiu has a memory connected to this characteristic hairstyle…and no, he did not wear this style himself, but an older boy from the village did. Can you imagine what an influence music has that young boys in England, in the US, in Poland and all around the world were sporting the same crazy hair-do after one hit video. So it was not Misiu who was sporting this do but rather his friend Tadek. Misiu to this day is convinced that Tadek, armed with his Limahl hair, was able to single-handedly score all the chicks from DDR (Eastern Germany) who were in Poland on kolonia (camp). 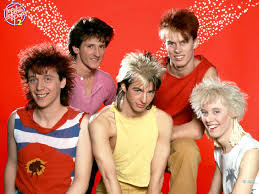 Mirror, mirror on the wall…